As you may know, the classic multi-platform media center software called XBMC has undergone some revisions and is now called Kodi. It offers a way to watch movies and TV shows on a variety of different boxes: your Raspberry Pi, your PC or most importantly in this instance on your Mac.

If you have a large screen, then it’s tempting to use your Mac as an additional or even primary media hub if you live in a small apartment. A Kodi installation on your Mac can make this happen for you. It will add live TV, streamed stations and even the ability to watch downloaded films from USB with a remote control and make it a much easier and more fluid experience.

In this article we cover installing and using the software on your Mac and include ways of improving the user experience like remote controls and finding new add-ons.

Kodi is available for multiple operating-systems and hardware platforms, featuring a 10-foot user interface for use with televisions and remote controls. It allows users to play and view most videos, music, podcasts, and other digital media files from local and network storage media and the internet. 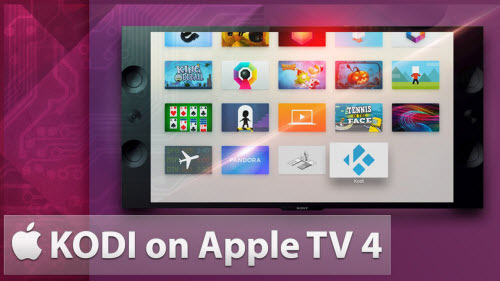 Kodi began as an open source alternative to set-top boxes (Okay, nobody can put anything on top of their LCD TVs now, but in prior times, TVs formed a convenient shelf.). Developers have used Kodi’s open source philosophy to make add-ons to the basic software which expand the capabilities of the target machine beyond the limits of normal closed systems.

As Mac users, we are used to Apple TV, and while you can hack the Apple TV, it’s inadvisable to do so as with all Apple devices and computers. Their stability depends on them being a closed system. Not so with Kodi, which can be a TV box, a movie box or a streaming audio and video player.

Setting up on the Mac

We are using the version for Mac OS X Yosemite. Go here to get the latest version of the Kodi software.

Installing the software is a routine matter of downloading the appropriate DMG disk image and dropping the icon into the Applications directory. Whether you download the 64bit or 32bit version is up to you, but if your processor is Core 2 Duo and up, you should probably go for the 64-bit version.

Once installed, you can run the program and then using the cursor keys to navigate. You use the ENTER key to click on an item and the ESC key to “back out.” You can also install a remote control of some kind; this one is great as it has a keyboard, but before you spend money on one it’s possible you already have a remote that will work. Macs used to ship with these little model A1156 remotes,

and they work perfectly with Kodi right out of the box. The newer remotes which look more like this

You use the Up, Down, Left and Right buttons to navigate, and the Center push button to activate an item or to play/pause. On the newer remote, the Play button is underneath the navigation buttons. When playing an video or audio stream, the Up and Down axis of the pad then controls volume.

The basic skin of the interface is called Confluence, and it has a stylish but basic style.

Left and right slides through the menus, and up and down drills down to the submenus below. You can skin the interface with a large number of interface add-ons right out of the box. A favorite is the Metropolis skin which gives a nice retro feel to the interface. Go to “Setting -> Appearance -> Skin” and choose Metropolis if you want to try it out.

As an Apple user, you might want to look at some of the skins like SIO2 which mimic the Apple TV to make you feel right at home.

The best part of viewing content with Kodi is that when you pause, it gives you all kind of info about the file, the time, and how long it will be before you finish watching the current file if you start again.

Tip: Incidentally, the drawback of skinning your Kodi installation before you follow any tutorials for finding and installing add-ons, etc., is that skins tend to move the menus around a little bit, and they won’t match any tutorials. Keep the standard Confluence skin for those occasions (or change back to it while you configure Kodi), as this will match any screen shots for the tutorials.

To start, you may want to check out these useful add-ons to replace your cable TV.

The Kodi package comes with a starter set of add-ons which you can install. These cover TV both live and recorded and certain TV services to which you will have to have a subscription. It may also be that certain services are region specific. For example, although the BBC iPlayer add-on works in the UK, in other locations, it won’t.

If it is available in your region, then you can either watch recorded TV or watch live:

As well as iPlayer, and Russia Today and Al-Jazeera for alternative news sources, you have a choice right out of the box of many useful add-ons like the Nasa Add-On which allows you access for free to view recorded programs or live streams:

There are a number of “repositories” as they call them of third party add-ons for Kodi, made by independent developers, which tap into the various movie download sites, and these are easy to find and install, should you wish to. Of course, we can’t condone copyright infringement, so we can’t tell you how to do that, but for completeness it would be remiss of us to exclude the information that the facility exists.

To install add-ons from repositories not included in the standard installation, search the Internet for third party “kodi add-on repositories,” download a zip file and install from “Settings -> Add-on’s.”

Once selected, you can search for the source to install from, either a USB stick or a place on the network. It’s a good plan to keep repositories of add-ons or other installs in a shared directory somewhere on your network.

Incidentally, there are also a number of add-ons to view Apple-specific news channels and in a form which is better suited to an easy chair than an office chair.

Kodi is a flexible open source media player and an interface to your entertainment sources, both locally on your machine and on the wider web. It’s hard to imagine a more integrated and infinitely expandable system.

Have you used Kodi on your Mac? What are your favorite add-ons? Let us know in the comments below.