This app is only available on the App Store for iOS devices. 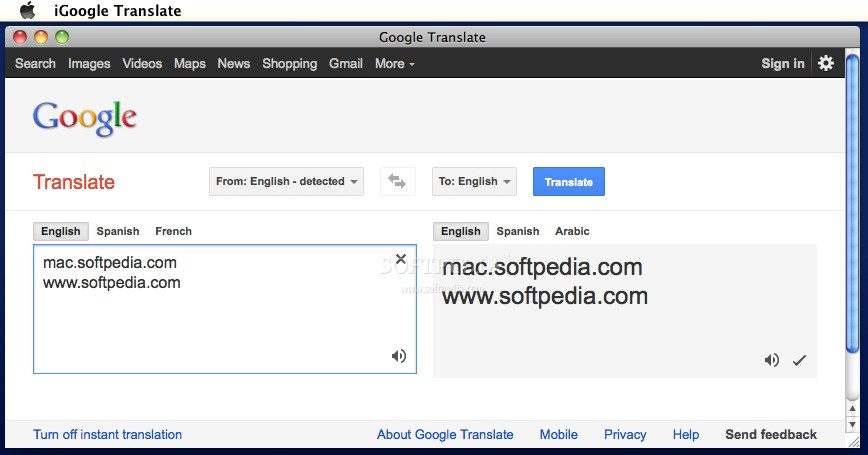 Microsoft Translator is a free, personal translation app for 60+ languages, to translate text, voice, conversations, camera photos and screenshots. You can even download languages for offline translation for free to use when you travel!
• Text translation into over 60 languages*, for online and offline use
• Camera translation to translate text within photos and screenshots
• Voice translation to translate speech, and a split-screen mode for two participants having a bilingual conversation
• Multi-person conversation translation - connect your devices and have in-person conversations with up to 100 people across multiple languages
• Phrasebooks for verified translations and pronunciation guides to help you learn important phrases in foreign languages when you travel
• Look up alternate translations and meanings of a word to find the best translation to express yourself
• Download languages for offline use for when you travel without an internet connection
• Hear your translated phrase out loud to help you learn how to say the translation
• View transliterations (pronunciation guides) to help you pronounce the translation (includes Pinyin support for Chinese)
• Share your translations with other apps
• Pin and save your most frequent translations for later
• Translate websites on Safari using the Microsoft Translator browser extension
• Speak to your Apple watch to get an instant translation
• Automatically sync translations between your phone and Apple watch
Translator supports the following languages: Afrikaans, Arabic, Bangla, Bosnian (Latin), Bulgarian, Cantonese (Traditional), Catalan, Chinese (Simplified), Chinese (Traditional), Croatian, Czech, Danish, Dutch, English, Estonian, Fijian, Filipino, Finnish, French, German, Greek, Haitian Creole, Hebrew, Hindi, Hmong Daw, Hungarian, Icelandic, Indonesian, Italian, Japanese, Kiswahili, Korean, Latvian, Lithuanian, Malagasy, Malay, Maltese, Norwegian, Persian, Polish, Portuguese, Quer'etaro Otomi, Romanian, Russian, Serbian (Cyrillic), Serbian (Latin), Slovak, Slovenian, Spanish, Swedish, Tahitian, Tamil, Telugu, Thai, Tongan, Turkish, Ukrainian, Urdu, Vietnamese, Welsh, and Yucatec Maya.
Microsoft Translator is powered by cutting-edge technology used by Office, Bing, Skype, Internet Explorer as well as by partners such as Twitter, Yelp, eBay, WeChat and more.
*Some features are not available in all languages.
// Request for User Permissions //
[Mandatory access]
1. View Network access
To detect whether the device is on Wi-Fi, mobile data, or not connected to a network. This helps the app know whether it should translate while online, or use an offline language pack.
2. Network access
For access to Wi-Fi or mobile data to perform text or speech translations, and download offline language packs.
[Optional access]
1. Camera
To take pictures for image translations, and to scan QR codes when joining a conversation.
2. Microphone
To translate speech.
3. Photos/Media/Files
To open photos from the device for image translation.
4. Storage
To open photos from the device for image translation, and to save downloaded offline language packs.

Modified sharing a conversation code: it will now send a link to open in browser
Refreshed icons for phrasebook, translation history and settings
Added a close button in phrasebook
Fixed display bug where status bar is unreadable on the settings page
Fixed issues for updating offline language packs

I am from iran but i am living in Turkey and I don’t know Turkey so i have no other choices to speaking English with people of Turkey which is so hard because there is few people here who can speak English and i need to buy too many things from stores which is 99 percent in Turkey language so i start to search for something better than google translate and i test this one now . It’s not good in Persian language which is my native language but it’s working like a charm for Turkey to English and I didn’t expect that because i have too many problems with google translate these days.
Thanks for this amazing app and please if you can upgrade the Persian language too . Besides of that we need live translation too and we will pay for the good quality of it too because it’s super useful in outside of our home and we can not forcing the people to installing this app for having the live transition .
Thanks again and keep up and good work.

I moved to Switzerland and I used to use google translator for everything since it had image translation feature that came very handy when in restaurants, or in streets. However, after using Microsoft translator, I never went back to Google app. First off, MS translator does much better job of pronouncing the words or a phrase by slowing it down for each retry. Secondly, when translating through image capture, it puts the words in the original image. Google and other translators bunch them all up in an unformatted paragraph which make it unclear where a sentence ends or starts. Very nice work by MS. The only improvement I would recommend is to have the landscape feature work. Currently, everything must be in portrait.

Just what I have been searching for

Just downloaded this app. I have been playing with it all afternoon. We are planing a trip to Japan in the fall. I have been thinking of purchasing one of those hand held voice translators. I have been reading reviews and looking at all manor of voice translators for months. Hand held and earbud translators range anywhere from $100 to as much as $400+. Well.....this app seems to have everything I have been looking for in a voice translator. All in an app on my iPhone 8. An additional plus is I wont have to carry my phone AND a separate voice translators. And the basic is FREE! I gave 4 stars because I haven’t had a chance you use this application while traveling. I have a feeling it will rate the five stars plus!